Home » Health » Symptoms of Anaemia/Anemia and how to cure it naturally? 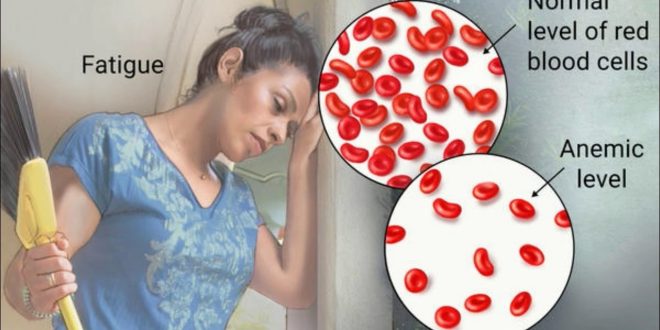 Symptoms of Anaemia/Anemia and how to cure it naturally?

Anaemia, which means ” lacking in blood “, is among the most common diseases affecting human beings. It denotes a shortage of rich red blood cells and colouring matter and usually results from consumption of refined foods.

The blood flowing in our veins and arteries is really living tissue. Nearly half of it consists of red blood cells which carry oxygen to the tissues. Approximately one trillion ( 10,000 million ) new blood cells are formed in the bone marrow daily. The raw materials required in the production of these cells are iron, proteins, and vitamins, especially folic acid and B12.

The red colouring matter, called haemoglobin is a protein which is composed of an organic iron-compound called “heme”. The globin is a sulphur -bearing protein which makes up 96 percent of the molecule. The formation of haemoglobin thus depends on adequate dietary supplies of iron and protein. Red cells have a lifespan of approximately 120 days and are destroyed and replaced daily. Each person should have 100 per cent haemoglobin or about 15 grams to 100 cc of blood, and a blood count of five million red cells per millimeter. A drop in the haemoglobin content results in anaemia and a consequent decreased ability of the blood to carry oxygen to the tissues.

There are two principal causes of anaemia. It can result from reduced or low formation of red blood cells either due to defects in the bone marrow or an inadequate intake of iron vitamins, and protein. Heavy loss of blood due to injury, bleeding piles and heavy menstruation may also cause anaemia. A lack of digestive acid of hydrochloric acid needed for digestion of iron and proteins may also result in anaemia. Emotional strain, anxiety and worry usually interfere with the manufacture of hydrochloric acid in the body.

Anaemia can also be caused by a variety of drugs which destroy vitamin E or by others which inactivate the nutrients needed in building blood cells. Chronic diseases such as tuberculosis, when accompanied by hemorrhage, may also result in anaemia.

Other little-known causes of anaemia are intestinal parasites or worms. Hookworm, pinworms, round worms and tapeworms feed on the blood supply as well as on the vitamins. Twenty-five hookworms can consume fifteen grams of blood every 24 hours; a tapeworm can cause acute shortage of vitamin B12. Symptoms of intestinal worms are itching at the rectum, restlessness at night with bad dreams, diarrhoea, foul breath, dark circles under the eyes and a constant desire for food. Garlic can help get rid of some types of intestinal parasites. Fresh papaya and grated raw carrot are also effective. After successful treatment for intestinal worms, perfect cleanliness should be observed to prevent recurrence.

Anaemia is much more easily prevented than corrected. A liberal intake of iron in the formative years can go a long way in preventing iron-deficiency anaemia.

Diet is of the utmost importance in the treatment of anaemia. Almost every nutrient is needed for the production of red blood cells, haemoglobin and the enzymes, required for their synthesis. Refined food like white bread, polished rice, sugar, and desserts rope the body of the much -needed iron.

Iron should always be taken in its natural organic form as the use of inorganic can prove hazardous, destroying the protective vitamins and unsaturated fatty acids, causing serious liver damage and even miscarriage and delayed or premature births. The common foods rich in natural organic iron are wheat and wheat grain cereals, brown rice and rice polishings, green leafy vegetables, cabbage, carrot, celery, beets, tomatoes, spinach ; fruits like apples, berries,cherries, grapes, raisins, figs, dates, peaches and eggs. It has been proved that a generous intake of iron alone will not help in the regeneration of haemoglobin. The supplies of protein, too, should be adequate. The diet should, therefore, be adequate in proteins of high biological value such as those found in milk, cheese and egg. Copper is also essential for the utilisation of iron in the building of haemoglobin.

Vitamin B12 is a must for preventing or curing anaemia. This vitamin is usually found in animal protein and especially in organic meats like kidney and liver. A heavy meat diet is often associated with a high haemoglobin and high red cell count, but it has its disadvantages. One cause of anaemia is intestinal putrefaction, which is primarily brought on by a high meat diet.

Moreover, all meats are becoming increasingly dangerous due to widespread diseases in the animal kingdom. There are, however, other equally good alternative sources of vitamin B12 such as dairy products , like milk, eggs and cheese, peanuts. Wheat germ and soyabeans also contain some B12. Vegetarians should include sizeable amounts of milk, milk products in their diet.

For prevention of anaemia, it is essential to take the entire B-complex range which includes B12, as well as the natural foods mentioned above. Eating lacto-avo products, which are complete proteins, and which also contain vitamin B12 is good insurance against the disease. Brewer’s yeast is a good source of complete protein.

A liberal intake of ascorbic acid is necessary to facilitate absorption of iron. At least two helpings of citrus fruits and other ascorbic acid rich foods should be taken daily.

Mention must be made of beets which are extremely important in curing anaemia. Beet juice contains potassium, phosphorous, calcium, sulphur, iodine, iron, copper, carbohydrates, protein, fat, vitamins, B1, B2, niacin B6, C and vitamin P. With its high iron content, beet juice regenerates and reactivates the red blood cells, supplies the body with fresh oxygen and helps the normal function of vesicular breathing.

A cold water bath is among the most valuable curative measures in anaemia. The patient should be given carefully graduated cold baths twice daily. Cold friction, hot epsom salt bath for five to 10 minutes once a week and an occassional cabinet steam bath are also recommended. Full sun baths are especially beneficial as sunlight stimulates the production of red cells.

There are other important factors which are helpful in curing anaemia. Deep breathing and light exercise like walking and simple yoga asanas should be undertaken to tone up the system. Sarvangasana paschomittanasana, uttanpadasana and shavasana are recommended. Massage also helps to keep the blood level high.