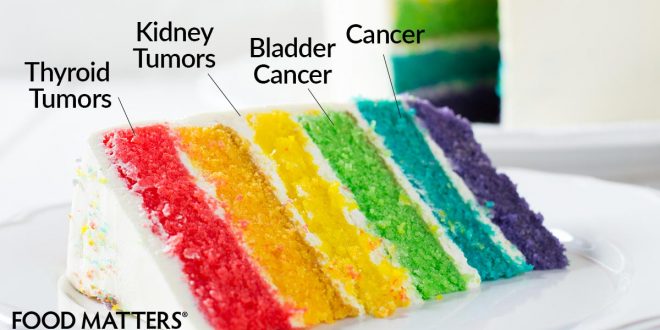 Holi announces the arrival of spring. Just as we indulge in the unadulterated joy of getting drenched and smeared with a riot of colours celebrating Holi, would it not be exciting to have such a rainbow on our plates too? Dark green broccoli or a luscious red tomato, purple plums, the ruby red cherries and so on.

While we are so particular about the toxicity of holi colours on our skin, we tend to blindly ingest all food colours. However, if you are used to ignorantly eating synthetic colours filled diet for your entire life with little or no harm to your body, it’s because the human body is remarkably resilient. But with age comes reduced resistance, and these toxins start accumulating in the body after a certain point. The liver, our natural cleanser, is the first to suffer.

There are two types of food dyes, natural and synthetic. Just check out the labels for food dyes like:-

Tartrazine is an artificial colour. Creates a lemon yellow colour. Can also be combined with Brilliant Blue FCF or Green S to make various green shades. This causes sometimes-severe hypersensitivity reactions and might trigger hyperactivity and other behavioural effects in children. Used in pet foods, numerous bakery goods, beverages, dessert powders, candies, cereals, gelatin desserts and many other foods as well as pharmaceuticals and cosmetics.

Has a recommended upper limit of 7.5mg per kilo of body weight.

Is it bad for me?

Causes allergic reactions in people, especially in those who are also allergic to aspirin, or berries and fruits that contain salicylates. Side effects include asthma attacks or swelling.

Tartrazine may be contaminated with the cancer causing compounds benzidine or 4-aminobiphenyl.

Some mouse studies suggest that tartrazine may have a negative effect on behaviour, learning and memory (no consensus yet, more research is required).

There is anecdotal evidence that tartrazine may cause migraines. To date there is little evidence to support this theory.

As of 2008, this is one of six colours that have been voluntarily removed from the food supply in the UK because of the link to hyperactivity.

Carmoisine code with Red #3 is another synthetic food dye in the red to maroon colour range. recognized in 1990 by the FDA as a thyroid carcinogen in animals and is banned in cosmetics and externally applied drugs. Used in sausage casings, oral medication, maraschino cherries, baked goods and candies. It is in the azo dye group. Other names for Carmoisine include Azorubine, Food Red 3, Azorubin S, Brillantcarmoisin O, Acid Red 14, or C.I. 14720

While still in use in Europe, it is not on the lists of approved food colours in the U.S. It is also not approved in Canada.3 Allura Red Code with Red#40– this is the most-widely used and consumed dye. It may accelerate the appearance of immune-system tumors in mice. It also causes hypersensitivity (allergy-like) reactions in some consumers and might trigger hyperactivity in children. Used in beverages, bakery goods, dessert powders, candies, cereals, foods, drugs and cosmetics.

Green , code with Green 3- This synthetic dye is banned in the EU and has been linked to testicular and bladder cancers and tumors in lab animals and causes irritation of the gastrointestinal tract. Green 3 is not a common dye, but it is used frequently in candy.

Caramel Brilliant Black-E151 Side effects:
Since it is an azo dye, it may elicit intolerance in people intolerant to salicylates. Additionally, it is a histamine liberator, and may intensify symptoms of asthma. In combination with benzoates, it is also implicated in hyperactivity in children. In the intestines, it can be transformed by bacteria into possibly hazardous compounds, hence the rather low ADI and restricted use.

Beside these upper mention list there are lot more synthetic dyes used in daily foods like Citrus Red #2 ,Amaranth, Ponceau, Red #3 (Erythrosine) etc. These Synthetic dyes linked to allergic reactions, skin rashes, hyperactivity, asthma and even cancer and it may be a good idea to avoid them. Natural dyes, on the other hand, can make food look wholesome and real, by restoring the ingredients to their natural state. Some natural red colors are derived from cherry, beet juices,indigo flower. Saffron and turmeric have been used from times immemorial to make yellow and orange colors. We are literally eating ourselves to death as we fill ourselves with chemicals, preservatives and colors. The solution lies with us, read labels carefully, avoid stashing the cart with canned foods filled with chemicals. Eat five times more natural food in the form of fresh fruit and vegetables to neutralize the detrimental effects of the chemicals.

Natural dyes on the other hand, can make food look wholesome and real, by restoring the ingredients to their natural state. Some natural red colors are derived from cherry and beet juices. The natural yellow and red are obtained from annatto which is a wax of a seed of a shrub in Central America, carotenoids, cochineal, beetroot extract, grape skin extract, paprika, saffron, turmeric,caramel. Caramel and vegetable carbons give the browns and blacks. Saffron and turmeric have been used from times immemorial to make yellow and orange colors. Indigo is one of the best-known natural colorings derived from the indigo plant and is in use for centuries. Red paprika is also used to enhance the red colour of food.